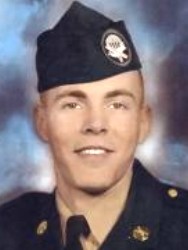 With Great Respect – Rest In Peace: SSG Lloyd Francis Mousseau. SSG Lloyd Mousseau had served for more than six-years when he died at age 24.  His home was in Cudahy, CA. Mousseau was survived by his three-year-old daughter, Kathy, who lived with his mother in CA. SSG Lloyd Francis Mousseau is buried in All Souls Cemetery, Long Beach, Los Angeles County, California.  His name location on THE WALL is Panel 55E Line 26.

On May 2, 1968, Staff Sergeant Lloyd Francis “Frenchy” Mousseau served as the 1-1 or assistant team leader to LeRoy N. Wright on a special mission to find out about enemy activity in Cambodia.  According to Roy Benavidez’s book Medal of Honor, Mousseau, Wright, and O’Connor were to “discover what paths they [NVA] were using and to map unmarked trails.   They were also instructed to steal an enemy truck and drive it back to B-56 so that intelligence officers could see first-hand what its contents were.”  The team went into Cambodia and landed in a dense jungle; they moved through the underbrush until they came to a path.  Wright signaled to Mousseau to take the point.  He went down the trail with his weapon ready and returned saying he “had seen a few enemy soldiers coming down the trail.”  Wright and Mousseau engaged the enemy, but one man let out a short burst of gunfire that alerted NVA in the area.  Wright radioed a request for the team to be evacuated; it was denied.  The team moved away, and when they were stopped again by the enemy, one of the allied CIDG acted as if they were seeking a downed US Helicopter.  “O’Connor and Mousseau turned to study a map so their faces would be hidden.”  However, the team members soon learned that it was a trap and Wright put in a second call for evacuation, which was granted.  Members of the 240th AHC immediately took off.  One of the Slicks was lured to a bogus landing zone (LZ) by NVA and attacked.  The Recon Team continued to lay down fire trying to give the choppers assistance.  During the fighting, Wright was killed; O’Connor and Mousseau took numerous hits.  Ray Benavidez describes what he saw, “I found Mousseau first, and even though I knew the team was in trouble, I was shocked by what I saw.  Mousseau had taken a round in the eye and the shoulder…… He had dragged himself to a tree and propped himself up against it, running out of energy.  But he was a good soldier, and he could still fire his weapon.  He was determined to keep going.”  Benavidez got the wounded to a chopper, that was subsequently shot down with Mousseau and four others hung out the tail returning fire.  Benavidez got the men out of the chopper and under cover.  Another chopper finally arrived, and the wounded, dying, and dead were loaded.  According to The Military Hall of Valor Project, SSG Mousseau died beside MSG Roy Benavidez in the medevac helicopter just minutes from the hospital in Saigon. Benavidez recalled Mousseau’s last minutes in his book The Three Wars of Roy Benavidez, “Minutes away from the doctors in Saigon, I felt his fingers dig into my palm, his arm twitching and jumping as if an electric current was pouring through his body into mine. I…..saw his eye widen, staring full into my face, and pain and fear radiating from him like a heat wave. He blinked once, the grip loosened, and his face softened as his eyelid drooped. It was like a brightly lit candle guttering and going out.”

Staff Sergeant Lloyd Francis Mousseau was posthumously awarded the Distinguished Service Cross, the U.S. military’s second highest award for valor, for his part in the 2 May 1968 action.

“The President of the United States of America, authorized by Act of Congress, July 9, 1918 (amended by act of July 25, 1963), takes pride in presenting the Distinguished Service Cross (Posthumously) to Staff Sergeant Lloyd Francis Mousseau (ASN: RA-19712162), United States Army, for extraordinary heroism in connection with military operations involving conflict with an armed hostile force in the Republic of Vietnam, while serving with Detachment B-56, 5th Special Forces Group (Airborne), 1st Special Forces. Staff Sergeant Mousseau distinguished himself by exceptionally valorous actions on 2 May 1968 as assistant team leader of a twelve-man Special Forces/Vietnamese reconnaissance patrol operating in enemy territory. The patrol was heavily attacked by enemy forces firing grenades, small arms and automatic weapons. Although Sergeant Mousseau was seriously wounded in the initial barrage, he ignored his injuries and braved the devastating fire time after time to deploy his men in a tight defensive perimeter. While fighting furiously to repel the determined attackers, a cartridge ruptured in his rifle, wounding him again and rendering the weapon inoperative. He quickly secured another rifle from a fallen comrade in time to engage and kill three enemy troops who had reached his defensive lines. The patrol leader was killed and Sergeant Mousseau immediately assumed command. Using a radio, he directed gunship strikes on the insurgents which forced them back. As an extraction helicopter attempted to land, it was hit by a renewed enemy fusillade and crashed. Sergeant Mousseau continued to direct close air support. Despite grenade wounds to his legs, he maneuvered under a curtain of fire to locate enemy positions and strong points. He then adjusted napalm and bombs to within thirty meters of his perimeter, forcing the enemy to withdraw. When a rescue helicopter arrived, he directed his men aboard before mounting the craft himself. As he entered the ship, he was killed by an enemy sniper. His fearless and selfless leadership in the heat of battle prevented his unit from being overrun. Staff Sergeant Mousseau’s extraordinary heroism and devotion to duty were in keeping with the highest traditions of the military service and reflect great credit upon himself, his unit, and the United States Army.”  (DSC citation, USARV GO#2893, dtd 06/18/68.) 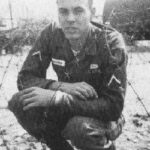