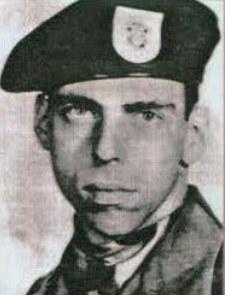 SSGT Lee D. Scurlock, Jr. was the radio operator for a MACV-SOG reconnaissance team of C & C Detachment which was inserted into Laos on December 21, 1967. The mission went smoothly until the second day when the team split up to investigate a hut. Enemy contact was made by both groups and an immediate extraction was made.

One element of the team was extracted with no problems. However, the remainder of the team was forced to use rope ladders. The helicopter attempting the extraction of the second element was from the 199th Aviation Company and went by call sign “Gator 376.” SSGT Scurlock made one attempt to climb the ladder but lost his grip. He jettisoned the radio and his rucksack and again attempted to climb the ladder.

The helicopter returned to its operational base where the commander ordered a recovery effort. The team returned to the landing zone (which was located near the border of Cambodia in Attopeu Province, Laos), but could not find SSGT Scurlock. The team did see a body some distance away and tried to get into that area, but were driven off by hostile fire. The following day, the area was aerially searched, but no body could be found.

For every insertion like Scurlock’s that was detected and stopped, dozens of other commando teams safely slipped past NVA lines to strike a wide range of targets and collect vital information. The number of MACV-SOG missions conducted with Special Forces reconnaissance teams into Laos and Cambodia was 452 in 1969. It was the most sustained American campaign of raiding, sabotage and intelligence gathering waged on foreign soil in U.S. military history. MACV-SOG’s teams earned a global reputation as one of the most combat-effective, deep-penetration forces ever raised.