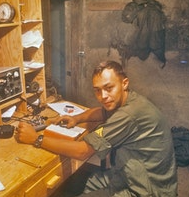 Source: Compiled from one or more of the following: raw data from U.S. Government agency sources, correspondence with POW/MIA families, published sources, interviews. Updated by the P.O.W. NETWORK 2020.

SYNOPSIS:  Sgt. Lawrence Englander was an advisor on a CIDG heliborne assault operation conducted southwest of Thuong Duc Special Forces Camp.  His unit came under intense automatic weapons fire from fortified NVA positions 8 miles from the camp.  Englander stated by radio that he was wounded in the foot and arm and pinned down in an open field behind a dead Vietnamese radio operator, but refused help because he claimed to be “zeroed in”, that any movement would bring heavy fire, and that he would try to crawl back to friendly lines.

Englander’s plan was to move back to the reserve element to lead them to the forward element.  While moving to the rear, Englander was again hit by enemy fire.  LLDB Lieutenant Ho Tang Dzu stated that he saw him hit by machine gun fire in the back and head, but attempts to reach him failed and the battlefield was abandoned.  He felt that the hits Englander took were probably fatal.

When sweeps of the area were conducted later, no trace of Englander was found. While it was common for the Vietnamese to bury American casualties and carefully conceal the graves, the possibility also exists that Englander survived to be captured.  He was classified Missing In Action, and is among nearly 2500 Americans who remain unaccounted for in Vietnam