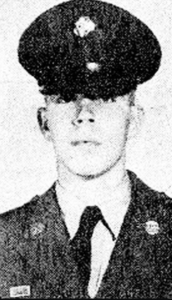 SFC Kenneth Lawrence Dulley, RT Hammer (CCS), who was KIA on May 6, 1969. SFC Dulley left behind a widow and small daughter. He was on his third tour in Vietnam and is buried in Arlington National Cemetery.

SFC Kenneth Dulley Bronze Star Citation: For heroism in connection with ground operations against a hostile force in the Republic of Vietnam: Sergeant First Class Dulley distinguished himself by exceptionally valorous actions on 6 May 1969, while serving as an assistant team leader of a special operations team on a classified mission deep within enemy held territory. Heavy enemy contact was considered predictable due to the nature of the mission. The team was compromised within an hour after landing, and a numerically superior enemy force pushed them into a narrow outcrop of woods, leaving them with no alternative other than defending in place. This the team did, initiating contact at less than thirty meters. As soon as contact was initiated, Sergeant Dulley began moving from position to position, exposing himself to enemy fire with utter disregard for his own safety, in order to better direct the fire of the Special Commando Unit members of the team. Although this was Sergeant Dulley’s first combat operation since his arrival in country, his courage and calmness were an inspiration to the rest of the team. As the team leader began to direct the gunships in making their runs, Sergeant Dulley continued to direct the team as the enemy were flushed out. When the evacuation helicopter started into the landing zone, Sergeant Dulley spotted troops moving into position in the southern wood line which would have given them a clear field of fire on the exposed helicopter. Sergeant Dulley immediately began placing effective fire on the enemy positions, giving the aircraft time to pull off. Sergeant Dulley continued to direct and inspire his troops until a machinegun burst mortally wounded him. His courage and selfless devotion to duty played a major role in the successful exfiltration of his team. Sergeant Dulley’s performance and dedication to duty are in keeping with the highest traditions of the military service and reflect great credit upon himself, Special Forces, and the United States Army.