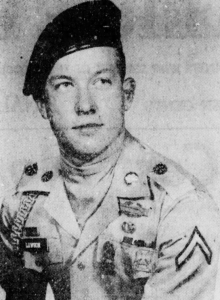 Other Personnel In Incident: (none missing)

SYNOPSIS:  On April 9, 1968, SP4 Lawson, a member of Detachment B36, Company A, 5th Special Forces Group was participating in a 2 phase operation in Phuoc Long Province, South Vietnam.  While guarding a portion of the perimeter, Lawson was struck and killed by shrapnel from an American 175mm artillery shell which fell short of its intended target.

A helicopter was called in to extract his body and the bodies of 1 indigenous soldiers.  Following the extraction, his body was dropped to the
ground in the general vicinity.  Three ground search parties were unable to relocate the body due to the density of the vegetation, foliage and hilly terrain.  Aerial searches were conducted for 2 days without success.  A sniffer mission was also flown, but there were no positive findings.