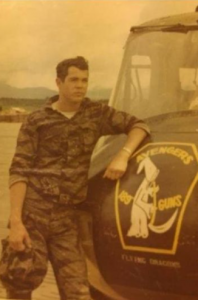 SFC John R. Adams was crew chief aboard a UH1C gunship (tail number 66-00695) flying cover on an insertion mission west of Dak To, Republic of Vietnam on November 8, 1967. While circling the inserted troops, the helicopter began to lose power and attempted to land. Failing to find a suitable landing zone, aircraft commander WO1 William J. McKenna Jr. allowed the aircraft to settle tail first into the trees. As the helicopter struck the trees, the tail boom snapped off, spun and came to rest on an upslope, caving in the front of the aircraft. McKenna and gunner SP4 Begay exited the right side of the chopper, while pilot WO1 Weeks and Adams exited the left. Begay had suffered a broken leg, Weeks had injured his right foot, and Adams was broken his arm and appeared to be in shock. The four had barely exited the helicopter when they began to receive small arms fire. McKenna radioed for help, and he, Begay and Weeks made their way to an extraction point, with Begay dragging Adams. Begay, because of his own injuries, was unable to carry Adams far, and left him in a slumped-over position against some bushes. Begay later stated that Adams’ condition had worsened. While awaiting extraction, McKenna returned to the crash site to see if he could help Adams. He saw two Viet Cong, one of whom appeared to be shooting at Adams. McKenna shot at the Viet Cong, then fell down the slope to the creek bed from which he was extracted. Adams was last seen slumped over just outside the left cargo door of the crashed aircraft. Subsequent rescue efforts were frustrated by enemy fire, and the company commander ordered all rescue attempts terminated. Following termination of rescue efforts, the downed aircraft was destroyed to prevent capture of weapons and equipment. SFC John R. Adams survived the crash of his helicopter, and with the presence of enemy forces, stood a good chance of being captured. His helicopter contained equipment the Army did not want in the hands of the enemy. Twelve 500 lb. bombs, six CBU-2’s, 1600 rounds of 20 mm fire, additional bombs and napalm were dropped on the crash site to prevent capture. [Taken from vhpa.org] 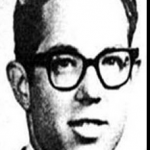 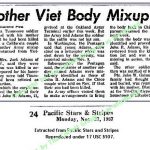 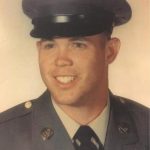 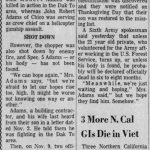 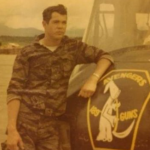