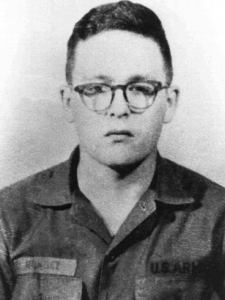 SYNOPSIS: PFC John N. Huntley was the door gunner aboard a UH1H helicopter from the 57th Aviation Company, 17th Aviation Group on an extraction mission in Laos. The helicopter was to extract a Special Forces Long Range Reconnaissance Patrol (LRRP) in Attopeu Province.

As the helicopter was lifting from the extraction zone with four men attached by McGuire rigs, they were receiving heavy volumes of enemy fire.  When the helicopter reached an altitude of 400 feet, gunfire hit the engine and the helicopter began falling. The pilots were able to slow the descent somewhat by autorotation, but survivors of the incident reported that after the helicopter was hit, it bounced, twisted and came to rest burning on its right side.

The crew members lost consciousness and regain consciousness just as the pilot and copilot were dragging the apparently lifeless body of Huntley from beneath the helicopter. While they were doing this, they were knocked down by the explosion of the helicopter and had to stop their attempts to rescue the door gunner.

Because of intense enemy activity, no further attempts were made to recover Huntley, and it was assumed that his body was consumed by the blazing aircraft. He was listed as Killed, Body not Recovered, with a strong probability that the enemy knows his fate.