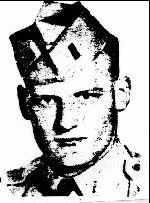 On April 22, 1961, a four-man team from the U.S. Army 7th Special Forces Group was operating alongside the 6th Bataillon d’Infanterie (Lao) north of Vang Vieng, Laos, when it came under a heavy artillery barrage from the Pathet Lao, a group of Laotian communist fighters, at Phou Tesao. The Pathet Lao quickly overran the battalion and the Special Forces team’s commander was captured. The sole survivor of the four-man team reported that he last observed his two other team members jumping into an armored vehicle in their effort to avoid capture. As the vehicle took off heading south on Route 13 toward Vang Vieng, it came under enemy attack, and the two team members riding on it were killed.

Sergeant First Class John Malcolm Bischoff entered the U.S. Army from South Carolina and was a member of Company B, 7th Special Forces Group, 1st Special Forces Command. He was the medic for this field training team, and he was killed in action during the fighting. Attempts to locate his remains following the incident have been unsuccessful.