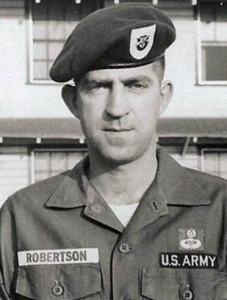 Source: Compiled by Homecoming II Project 01 July 1990 from one or more of the following: raw data from U.S. Government agency sources, correspondence with POW/MIA families, published sources, interviews. Updated by the P.O.W. NETWORK 2017.

SYNOPSIS: MACV-SOG (Military Assistance Command, Vietnam Studies and Observation Group) was a unconventional warfare task force engaged in highly classified operations throughout Southeast Asia. The 5th Special Forces channeled personnel into MACV-SOG through Special Operations Augmentation (SOA), which provided their “cover” while under secret orders to MACV-SOG. The teams performed deep penetration missions of strategic reconnaissance and interdiction which were called, depending on the time frame, “Shining Brass” or “Prairie Fire” missions.

SFC John H. Robertson was assigned to Command & Control North, MACV-SOG. On May 20, 1968, he was a passenger and the only American onboard a Vietnamese CH34 helicopter on a medevac mission four miles inside Laos south of the A Shau Valley. (Note: some records indicate this was a resupply mission to a Special Forces recon force which was in heavy enemy contact.) As the aircraft was landing, it was hit by enemy fire, smashed into the trees, and burst into flames, breaking up as it hit the ground.

Several helicopters made low passes over the crash site, but no sign of survivors was observed. Enemy activity in the area prevented Vietnamese ground units from reaching the wreckage. Still, the possibility existed that SFC Robertson was not killed in the crash of the aircraft, because he was listed Missing in Action rather than Killed.

For every team like Robertson’s that was detected and stopped, dozens of other commando teams safely slipped past enemy lines to strike a wide range of targets and collect vital information. MACV-SOG teams conducted the most sustained American campaign of raiding and intelligence gathering waged on foreign soil in U.S. military history in Vietnam, and MACV-SOG’s teams earned a global reputation as one of the most effective, deep-penetration forces ever raised.