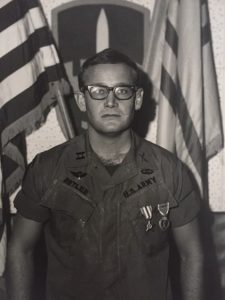 Jim was born and raised in Portland, Maine. After graduating North Yarmouth Academy, Jim went on to Bowdoin College and University of Maine. Jim Join the ROTC and was later commissioned as an officer in the US Army.  Jim selected infantry as his military branch and volunteered for Airborne training Ranger school and Special Forces training.  He excelled in all three areas.  In Vietnam Jim served as a Green Beret and was assigned to MACV-SOG, Command and Control North (CCN) from 1968 to November 1971,  As team leader “One Zero” of RT Python, Jim Spent multiple day missions behind enemy lines recusing down pilots, running POW / MIA searches  plus many missions in to Laos and North Vietnam. Jim’s code name during his bright light missions with HEAVYHOOK was FAT CAPPER-13.  Jim later returned to Vietnam on a classified mission during the Easter offensive in June 1972 and left in November.  His Awards and Badges include Silver Star with 2 oak clusters, 4 Bronze Stars with “V” device, 4 Purple Hearts, Presidential Unit Citation (For Exceptional Heroism), the Air Medal, multiple Army Commendation Medals, Air Force Commendation Medal, Vietnamese Gallantry Cross and other awards.

After Vietnam Jim’ s military career would take him away for weeks at a time in Special Ops Europe.   In 1975 Jim chose his final assignment as an advisor at the Defense Langue Institute in Monterey.  In the Monterey Peninsula Jim spent his life with his wife and children. 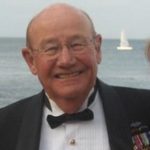 History of the SOA

The early SOA composed only of recon team personnel & the personnel who worked for MACVSOG and supported their missions. Our association would encompass all four services as well as certain government entities to include the chopper pilots who flew for us, the Air Force personnel who directed and supported us, as well as the few Marines and Naval personnel that worked in SOG as well as in our operations.

We had a special kind of brotherhood… We would have given our lives for each other and in some cases, we did, and I did not want to lose those relationships that I had & we haven’t to this day. Due to the highly classified nature of our SOG unit, we weren’t allowed to converse with others about our missions, not even to other Green Berets, and we found that we were the only ones on this planet who understood what each other have gone through. The SOA offered a way to preserve these relationships.

At our first reunion we had 13 men get together at the Fort Devens Rod and Gun Club. The stories were great & the camaraderie was back between all of us. At this meeting on Christmas Eve, 1971 we reaffirmed our commitment to each other and knew that, regardless of where life took us, we would always be there for each other. It was this moment that I recognized the value of an “official” Special Operations Association to both the men and to the family of those lost. I felt the need to set up the SOA in order to obtain coverage for our unique veteran concerns and to take care of  “Our Guys”. The Special Operations Association established a secure line of communication that was needed for me & my men.

We all agreed that we would make an effort to get together at least every five years regardless of where we were in the world.  From that moment on, each and every one of us knew that we had friends closer than brothers and should the need arise all we had to do was declare a PRAIRIEFIRE EMERGENCY and a BRITELIGHT would launch immediately. These relationships are still in place today.

The second reunion grew to 28 men who flew in from all over the world. Thus the memo of our reunion continued to pass by word-of-mouth. As men sent me contact info to each of them I started building the telephone tree; then in 1976 I incorporated the SOA as a (501)c3 California charitable organization and shortly after we became a national organization. The only membership criteria was to be SOG personnel or SOG support activities personnel and we had the men on board who could attest to who were SOG and not.

All of these men that I contacted were to try and locate other people who were either C&C Recon or supported our activities. At first it was to be a One-Zero organization, with projects/plans and directions dictated by One-Zeros. During the course of the next 10 years other C&C/SOG personnel directly contacted me and were interested in joining the organization.

The reunion was for the Brotherhood. First, I inducted our dear friend Martha Raye as an honorary member into the SOA. Then I invited the driving forces for The League of Families, as I heard that The League was being stonewalled by the Carter Administration and was not receiving any support from the VFW and the American Legion. I allowed their driving forces to address the SOA attendees about the total lack of support for the POW/MIA issue and after they were done we decided to support them in their endeavors. In 1979 the SOA became the first Veterans Group to formally support the League of Families.  In 1980 with the help of General Jack Singlaub, MACVSOG and its missions appeared for the first time in a documented history of the Vietnam War.

The Specific and primary purposes for setting up the Special Operations Association: