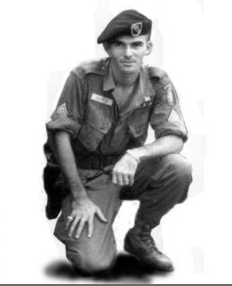 SYNOPSIS: SFC James R. Jones were all members of a 7 man recon team on a classified mission into Laos. The three were assigned to Headquarters & Headquarters Company, 5th Special Forces Group, but were under orders to Command & Control, MACV-SOG.

MACV-SOG (Military Assistance Command, Vietnam Studies and Observation Group) was a joint service high command unconventional warfare task force engaged in highly classified operations throughout Southeast Asia. The 5th Special Forces channelled personnel into MACV-SOG (although it was not a Special Forces group) through Special Operations Augmentation (SOA), which provided their “cover” while under secret orders to MACV-SOG. The teams performed deep penetration missions of strategic reconnaissance and interdiction which were called, depending on the time frame, “Shining Brass” or “Prairie Fire” missions.

On October 3, 1966, Echevarria and his team were inserted into Laos near the border of the MR-1 region of South Vietnam (just west of the Demilitarized Zone), and immediately came under enemy fire, apparently surrounded by enemy troops. The team requested immediate extraction, but heavy gunfire prevented the helicopter from landing on the LZ. Williams and Bui Kim Tien were trying to evade capture. Tien, who was later rescued, reported that SFC Williams told him both Jones and Echevarria were seriously wounded, perhaps near death.

On October 4, Williams and Bui spotted some caves, and Bui went forward to investigate them, at which point Tien was spotted by hostile forces and forced to leave the area. Tien later heard gunfire in the area, and believed that it was between SFC Williams and the enemy troops. Tien continued to evade for the rest of the day until he was picked up by friendly aircraft at 1500 hours.

Ray Echevarria’s photo was later identified as that of a prisoner of war by a defector. According to CIA analysts, this identification was an error, based on the report of Bui Kim Tien that Echevarria and Jones were near death. Tien was polygraphed, and his debrief is believed to be accurate. But still, doubts remain. The fact is, no one saw Echevarria, Williams and Jones die. With enemy so close, there is ample reason to believe they might have been captured.