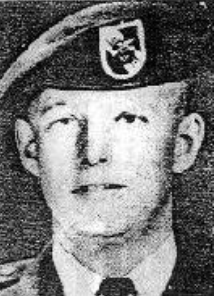 SYNOPSIS: James D. Cohron was born in Leon, Iowa and joined the service when he was 25. When he went to Vietnam, he was attached to MACV-SOG (Military
Assistance Command, Vietnam Studies and Observation Group), Command & Control North. MACV-SOG was a joint-service high command unconventional warfare task force engaged in highly classified operations throughout Southeast Asia. The 5th Special Forces channeled personnel into MACV-SOG (although it was not a Special Forces group) through Special Operations Augmentation (SOA), which provided their “cover” while under secret orders to MACV-SOG. The teams performed deep penetration missions of strategic reconnaissance and interdiction which were called, depending on the time frame, “Shining Brass” or “Prairie Fire” missions.

On January 12, 1968, SSgt. Cohron, was a member of Spike Team “Indiana,” the second man from the rear of the team formation, when the team was ambushed by an enemy force of unknown size 1 mile inside Laos south of Khe Sanh. The team broke contact by evading through a gully and set up a defensive position on a small hill where they called for helicopter extraction.

A head count was taken, and it was determined that Cohron and two indigenous personnel were missing. The team’s view of their path of evasion was obstructed by tall elephant grass, and they were unable to visually locate Cohron and the others. Attempts to raise them by radio failed. After contact with the enemy force was broken, the remainder of the team was extracted.

In the ensuing days, searches were made which yielded a small spot of blood where the initial contact was made, and Cohran’s food ration, which was identified by the empty cigarette package. Search efforts were terminated without success.