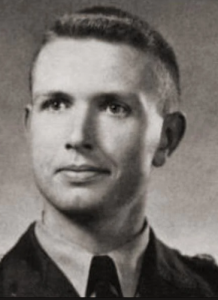 SSGT James D. Stride was assigned to Command and Control North, MACV-SOG in Vietnam. On October 5, 1968, Stride was the team leader, SP4 Steven D. Engelke, assistant platoon leader, SP4 Lynn M. Black, Jr., radio operator on a reconnaissance patrol in Saravane Province, Laos near the border of South Vietnam, and just about 10 miles south of A Shau. The platoon, in addition to its Special Forces members, consisted of an unspecified number of indigenous personnel.

Upon the team’s insertion into Laos, the team made contact with enemy forces. SSGT Stride ordered the team off the landing zone in order to break contact and to continue the mission.  A hundred yards from the LZ, the team was ambushed. In the initial burst of fire, Stride was mortally wounded. The team recovered the body and formed a perimeter. Two hours later, the team was forced to exfiltrate, but Stride’s body was left behind.  Because the area was hostile, it was not possible to return for Stride