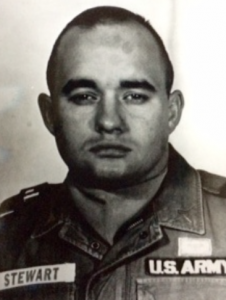 SYNOPSIS: On March 24, 1967, Capt. Jack Stewart and SSgt. Roger Hallberg
were advisors to a mobile strike force company on a combat operation in
South Vietnam.

The Mike Force company was conducting a heliborne assault on March 24, 1967, 7 miles east of Bu Dop in Phuoc Long Province, South Vietnam, near the Cambodian border. Shortly after landing, the company proceeded about 800 meters north where the point element began receiving automatic weapons fire. SSgt. Hallberg who was part of the point element, came back to the command group to report on the situation because he had no radio.

Capt. Stewart, after assessing the situation, tried to maneuver the recon platoon to flank the enemy, but it also ran into heavy automatic weapons fire. The second platoon then started to pull out. It was determined that the unit had been ambushed by two heavily armed NVA battalions. The remaining platoons fell back to the command group and took up positions.

Stewart and Hallberg’s attempts to consolidate positions around the landing zone supported by airstrikes failed. Hallberg was wounded slightly, and his commanding officer was wounded more seriously in the battle. When last seen, they were fighting while providing cover for the safe withdrawal of their companions who moved toward Bu Dop until they were picked up by friendly helicopters. Another group was sent immediately to aid them, but when they arrived at the site of the ambush they found no trace of Hallberg or Stewart.