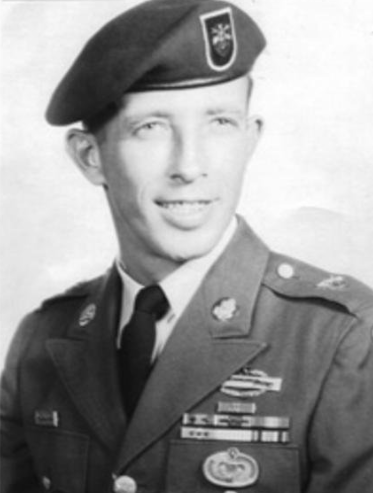 SYNOPSIS: On July 13, 1965, SFC Fred Taylor and MSGT Henry J. Gallant were U.S. Army Special Forces (B-52 Delta) advisors to a South Vietnamese unit (ARVN) on a reconnaissance mission in Dien Bien Province, South Vietnam when they were engaged by a hostile force.

During the battle, Gallant was wounded, although the seriousness of his wound was not known. The two were cut off from the bulk of their ARVN unit and were last seen as they were moving southwest into the surrounding jungle in an attempt to evade the enemy. All searches conducted were negative.

While the A Detachments of the Special Forces concentrated on manning static defenses and training natives in local defense, the B Detachments were committed to deep strikes into uncontrolled territory to seek out Viet Cong formations and supply sources. The genesis of this program (May, 1964) was called Leaping Lena, and provided the groundwork for the formation of a combined American/South Vietnamese special reconnaissance unit capable of conducting these hazardous missions. Organized as Project DELTA in October 1964, Detachment B-52 was created to provide a control headquarters in June 1965.

Sgts. Gallant and Taylor were not ordinary foot soldiers. They were highly trained in survival and evasion techniques. The chances of their survival, barring outright assassination, are high. The fact that Gallant was wounded and that all searches proved negative do not suggest survival, but do not contradict it.