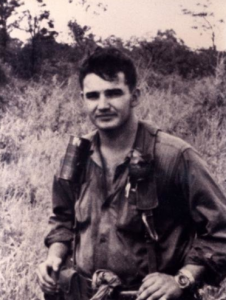 First Lieutenant Harold William Kroske Jr., who joined the U.S. Army from New Jersey, served with the Command and Control Detachment, 5th Special Forces Group. On February 11, 1969, he was the team leader of a six-man reconnaissance patrol inserted into Cambodia. As the team moved from the landing zone to its objective, it encountered enemy soldiers in the vicinity of (GC) XU 697 258. 1LT Kroske shot and killed two Viet Cong before he was hit in the stomach by enemy fire. His patrol members attempted to recover him but a persistent enemy fire forced them to break contact and leave. The men split up and evaded the enemy overnight, and the next morning, the five were successfully extracted by helicopter from three different landing sites. The helicopters searched for 1LT Kroske’s body, but were unable to locate it. While carried in the status of MIA, the Army promoted 1LT Kroske to the rank of Major (Maj). Today, Major Kroske is memorialized on the Courts of the Missing at the National Memorial Cemetery of the Pacific.