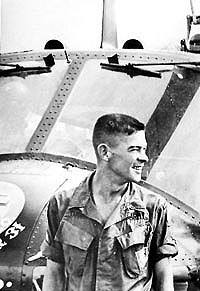 SYNOPSIS: On January 13, 1970, Sgt. Glenn Tubbs was a rifleman on a Long Range Reconnaissance Patrol (LRRP) along the Cambodian/South Vietnam border. His patrol was attempting to cross a stream by means of a safety line. Sgt. Tubbs was at the time wearing shorts, jungle boots, and had a CAR 15 rifle slung over his shoulder. (The CAR15 is a version of the M16 rifle, only with a flexible wire stock that can be moved into different configurations.)

When Tubbs was in the middle of the stream, it appeared that he was having problems keeping his shorts up. He lost his grip on the safety line and was swept away by the current. He was seen to go under water 5 times, and each time he reappeared. He seemed to be attempting to swim against the strong current instead of with it.

Witnesses watched helplessly, indecisive about getting close enough to Tubbs to rescue him. His difficulty downstream was that he was being attacked by alligators. The team members located hundreds of the creatures downstream as they searched for anything left of Glenn Tubbs.

Tubbs experienced a grisly demise – one that we would prefer not to think about. It is an accident that could have happened in many parts of the U.S., but Tubbs was involved in a war in a foreign country. The fact that he died an accidental death in the midst of war is tragically ironic. He is listed among the missing with honor, because his body was never found to be returned to the country he served.