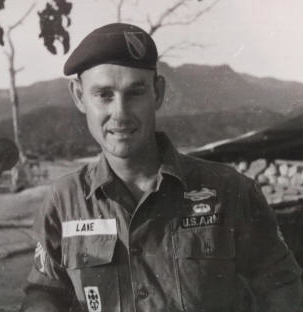 Source: Compiled from one or more of the following: raw data from U.S. Government agency sources, correspondence with POW/MIA families, published sources, interviews. Updated by the P.O.W. NETWORK in 2017.

SYNOPSIS: Glen Lane was the patrol leader of a spike team under orders to MACV-SOG in Vietnam. MACV-SOG, or Military Assistance Command Vietnam Studies and Observation Group, was a joint service high command unconventional warfare task force engaged in highly classified operations throughout Southeast Asia. The 5th Special Forces channeled personnel into MACV-SOG (though it was not a Special Forces group) through Special Operations Augmentation (SOA), which provided their “cover” while under secret orders to MACV-SOG. These teams performed deep penetration missions of strategic reconnaissance and interdiction which were called, depending on the time frame, “Shining Brass” or “Prairie Fire” missions.

On May 20, 1968, SFC Glen Lane and SSgt. Robert D. Owens were the only two U.S. members of the 6-man spike team “Idaho” assigned to infiltrate a denied area across the Lao border west of A Loui.

The team was inserted into the area by helicopter, and was heard from only once thereafter by a Forward Air Controller (FAC) about 1024 hours the same day. All further contact with the patrol was lost. The spike team “Oregon” was inserted into the same landing zone, and after finding a trail, searched about 50 meters from the area and noticed signs of a fire fight.

At that time, “Oregon” was attacked by an estimated company-sized enemy force and was extracted after suffering one killed and seven wounded. There was no further ground search for Owen or Lane. The 12 man team believed that the two had been either captured or killed.