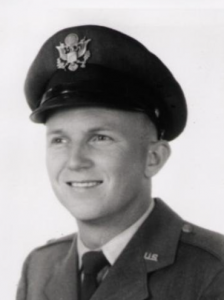 Major Gerald R. Helmich was “the pilot of an A1H, call sign “Spad 02,” that was scrambled to assist in the overall search and recovery (SAR) mission for the crew of “Owl 07,” a 2-man Army helicopter downed the day before.” He made a covering pass at the enemy while a rescue helicopter successfully recovered the downed airmen, then his aircraft was hit by hostile fire, crashed and exploded on November 12, 1969 over southern Laos.

Major Helmich was declared missing in action from that date until 1978, when the government officially declared him killed in action.He was awarded the Distinguished Flying Cross on September 16, the Air Medal on October 2, and another DFC on October 10. Because he was missing, not officially dead, Jerry Helmich was promoted to lieutenant colonel in 1973 and full colonel in 1978. However, in December 1978, a posthumous awards ceremony was held at Dobins Air Force Base in Georgia, at which time Gerald “Jerry” Helmich finally got a grave marker, a 21-gun salute, and the medals he had earned on the last day of his life: another Air Medal, the Purple Heart for his presumed injuries, and the Silver Star for heroism.

His remains were not recovered, but he is not forgotten. His name is inscribed on the Courts of the Missing at the Honolulu Memorial. And as stated earlier, on Memorial Day 1999, the city of Manchester erected a memorial plaque to him near the Queen City Bridge.