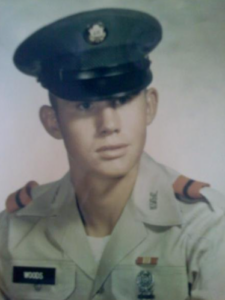 The team was assigned to MACV-SOG (Military Assistance Command, Vietnam Studies and Observation Group). MACV-SOG was a joint service high command unconventional warfare task force engaged in highly classified operations throughout Southeast Asia. The 5th Special Forces channeled personnel into MACV-SOG (although it was not a Special Forces group) through Special Operations Augmentation (SOA), which provided their “cover” while under secret orders to MACV-SOG. The teams performed deep penetration missions of
strategic reconnaissance and interdiction which were called, depending on the time frame, “Shining Brass” or “Prairie Fire” missions.

During the attempt to recover the patrol, Woods’ helicopter came under heavy fire and had to leave the pick-up zone with Lloyd, Watson and Hernandez attached to the three-staple rig. While in flight, the rope broke, and Hernandez fell 30-40 feet, landing in double canopy jungle. He was rescued the following day. The helicopter continued a short distance, and was hit by enemy anti-aircraft fire, crashed and burned.

On February 19, a Special Forces recovery team was inserted at the crash site to search the area. Woods and Berg were found dead in their seats. Johnson’s body was found in a tree. One leg of Demsey, the burned crew chief, was found in the cargo compartment. All remains were prepared for extraction, and the team left to establish a night defensive position. En route, the team found the remains of Lloyd and Watson, still on their rope slings, in the trees on the edge of a cliff. Because of the rugged terrain and approaching darkness, the rescue team leader decided to wait until morning to recover these two remains. However, the following morning, the search team came under intense fire, and the team leader requested an emergency extraction, and in doing so, left all remains behind.

All the crew and passengers on board the UH1H downed on the border of Laos and Vietnam west of the A Shau Valley that day were confirmed dead. It is unfortunate, but a reality of war that their remains were left behind out of necessity to protect the lives of the search team who found them. They are listed with honor among the missing because their remains cannot be buried with honor at home.