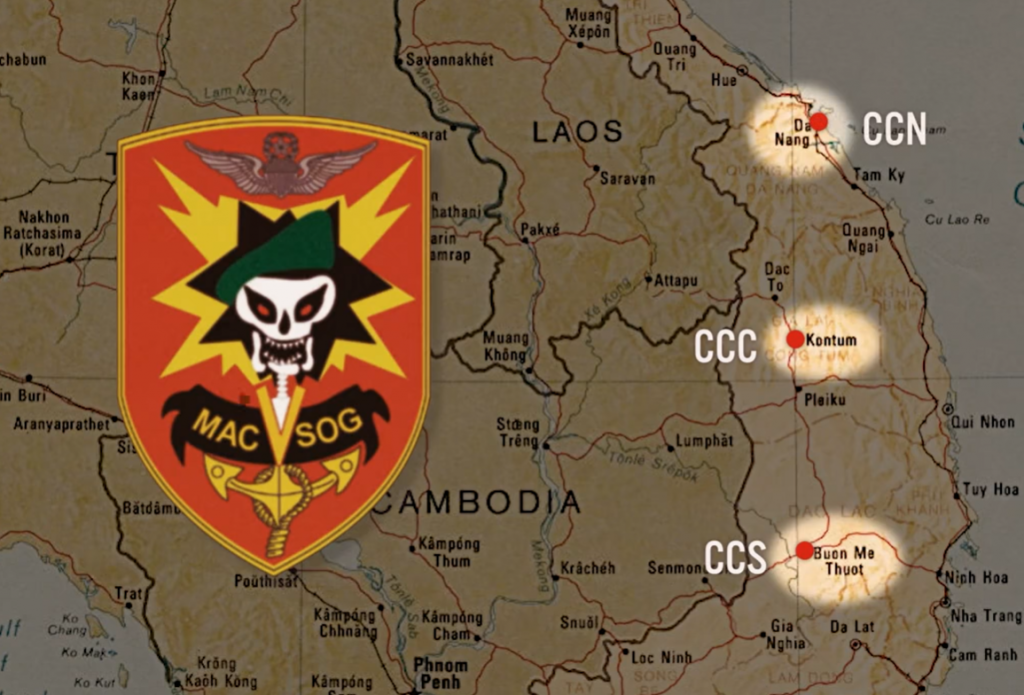 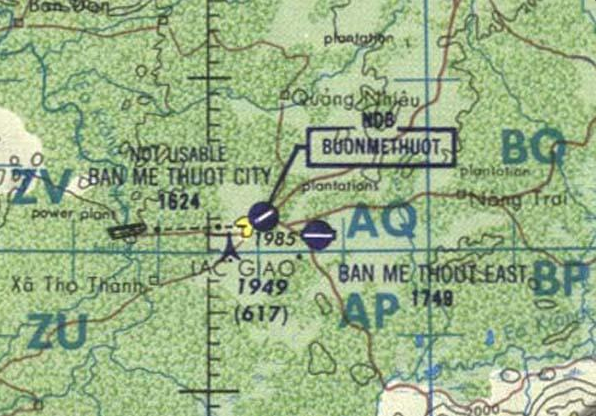 Command and Control South (CCS) was a new field command created by MACV-SOG when permission was granted to conduct cross-border missions into Cambodia. Commanded by a Major, and later a LtCol., CCS was the smallest of the MACV-SOG field commands and was engaged in classified special unconventional warfare missions inside VC-dominated South Vietnam and throughout Cambodia. Its organization was similar to that of CCC. It contained Spike recon teams (RT), Hatchet forces, and four SLAM companies. Cross-border operations had been conducted into northeastern Cambodia since May 1967 under Project DANIEL BOONE, later known as SALEM HOUSE. In 1971 the name was changed to THOT NOT. CCS folded in March 1971 when MACV-SOG created Task Force I Advisory Element at Da Nang. 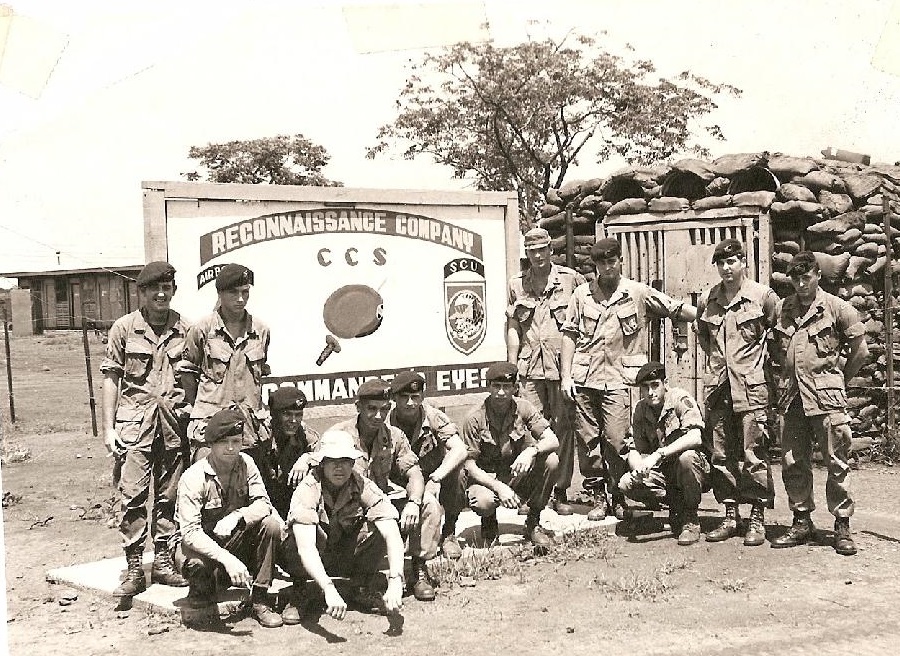 Hall kneeling behind POP Taylor. Although I think you are mistaken about Pappy Reed.  Pappy was the 1SGT of 2nd Co at that time and SFC Don Reed was our Acting 1SGT after Joe Brock left and before 1SGT Loft came in.  And, you are correct about Tony Appleton, who was (technically my 11) on RT Plane although he never ran a mission with us.  Ben was on his extension leave when this picture was taken.  I joined him in Bangkok shortly after this picture was taken and when we got back, Tony had half of RT Plane in HALO School, Hall had left and I took
over the company. by Troy

Back row – R to L second and third are, I think, Major James Asente and Major Willis Jones. – Roger Craft 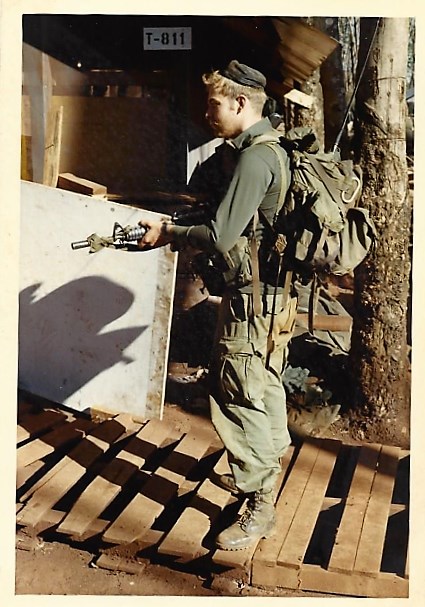 Movie theater at Quan Loi – those that sat on those ammo box seats can not forget the smell emitted from the shit burning details adjacent to this area. The outhouses had cut off 55 gal drums under the crapper and we had camp help dump some diesel into the barrel along with the sewage, lite it on fire and sit there stirring that shit until the fire died out!! – Mike Ash CCS 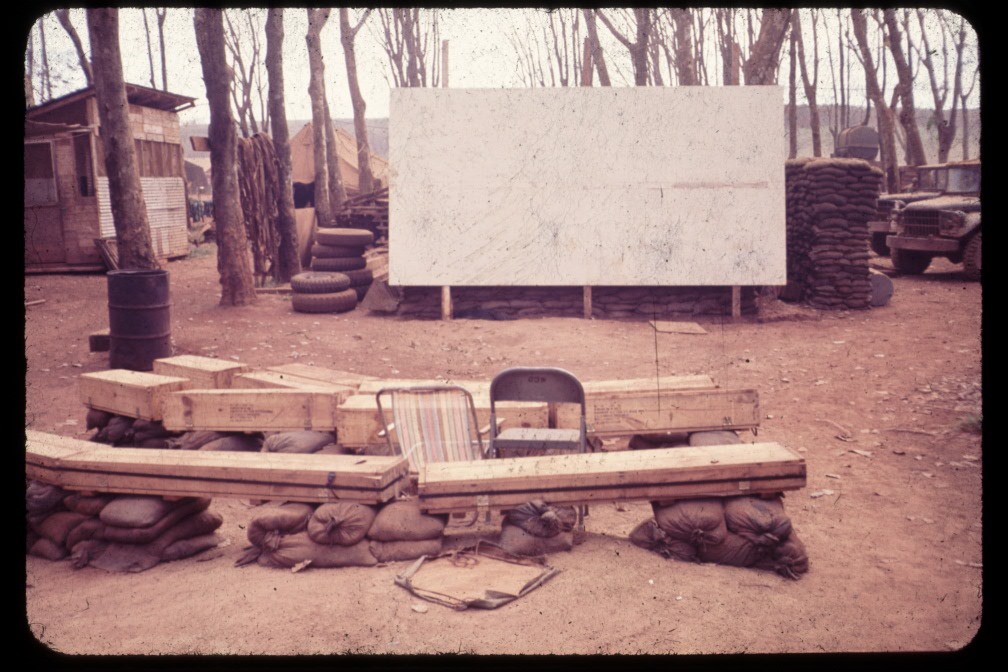 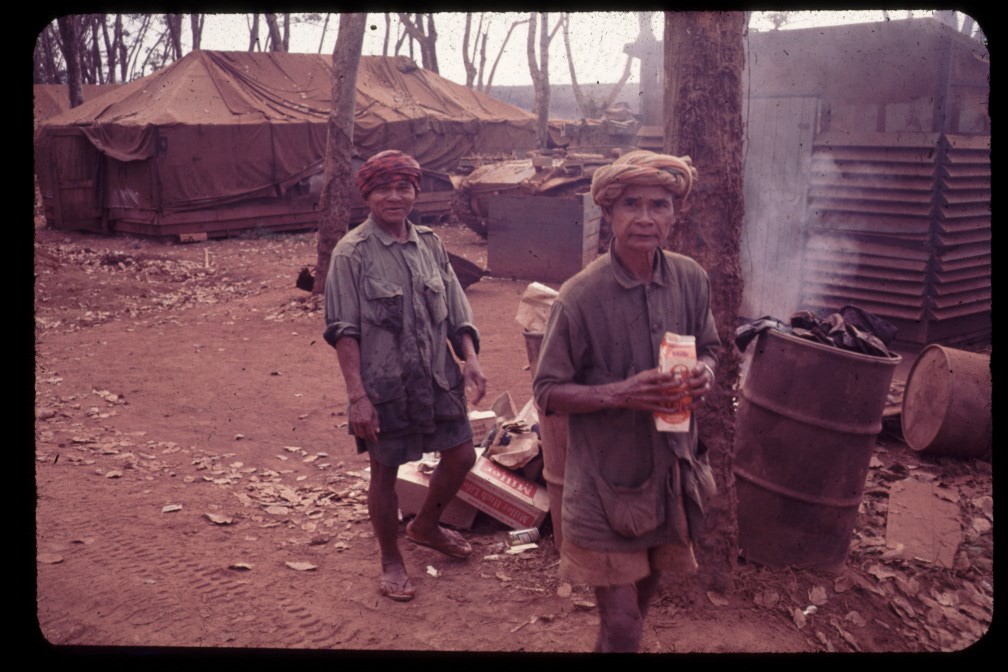 These were two of the guys that were assigned to burn the shit. They were local Yards that worked for us at Quan Loi. CCS –

This was a bunker that was along the walk way from the admin part of our camp and our temporary tent barracks area. CCS Mike Ash 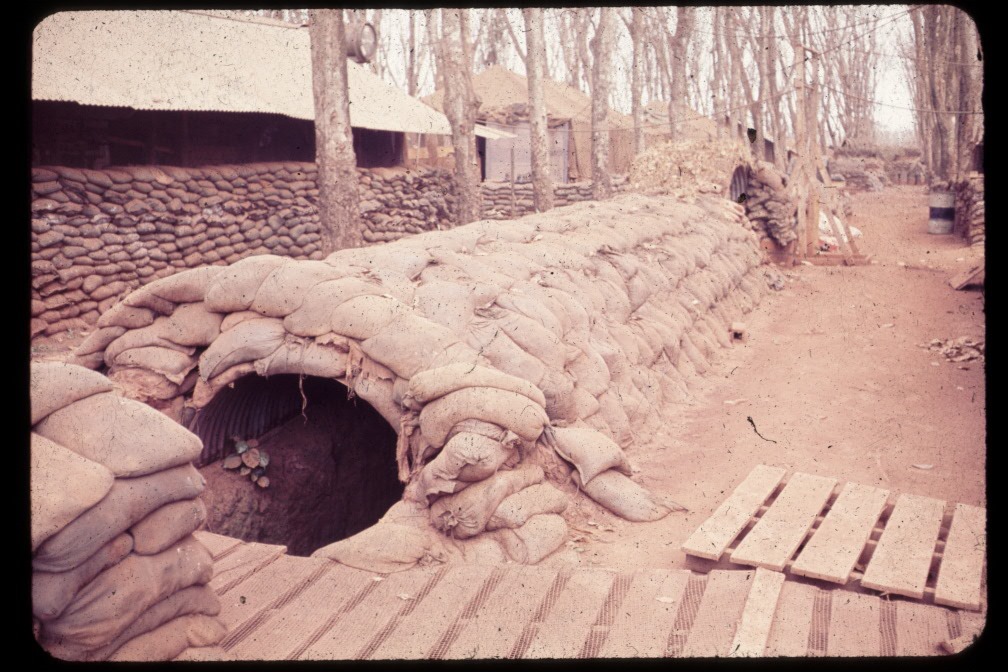 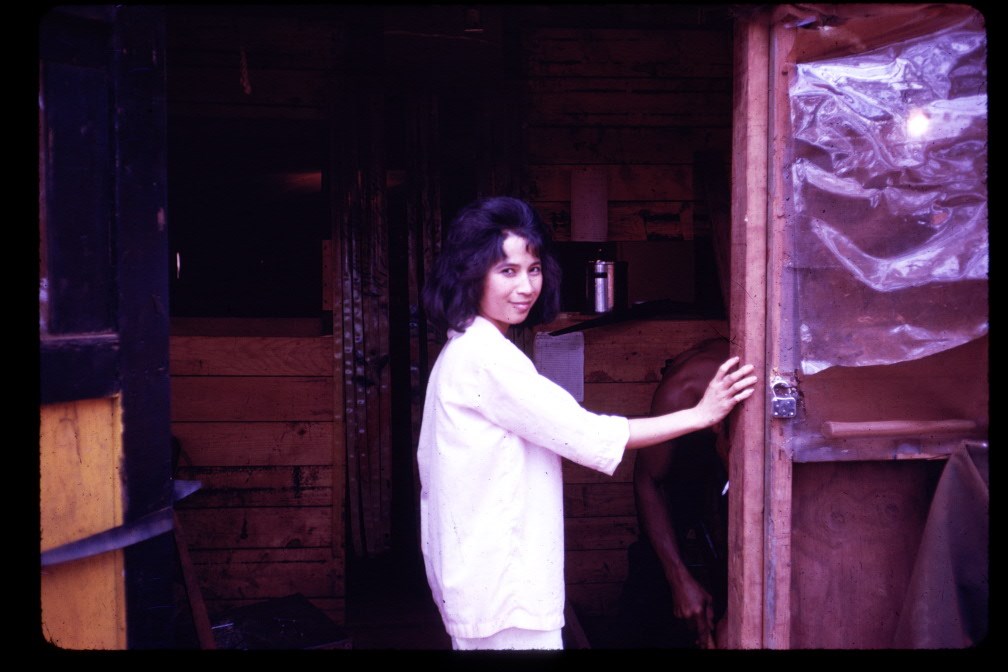 This was our beautiful bar tended standing outside the bar just to the right of the bunker above. CCS  – Mike Ash

This is Frank Opel (RT Awl) using the urinal just outside the bar. He drank Scotch and Root beer while he played some pretty serious double handed pinochle in the bar. CCS  – Mike As 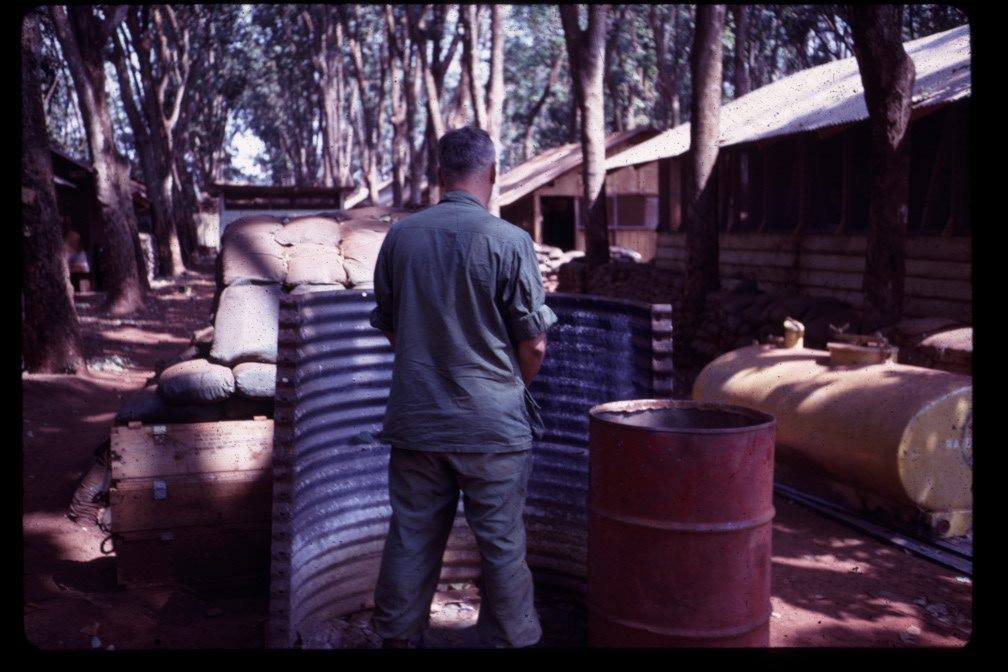 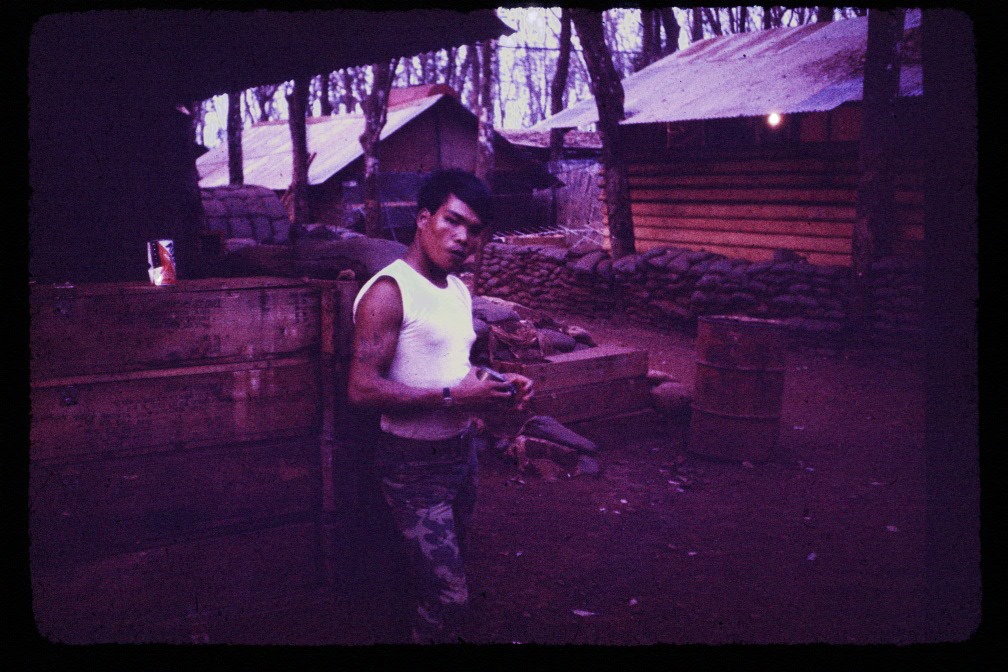 This is the tail gunner awaiting the next mission (RT Pick I believe). CCS Mike Ash 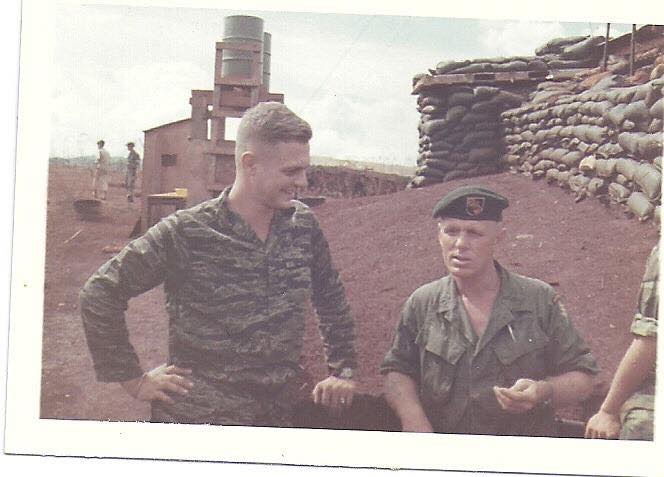 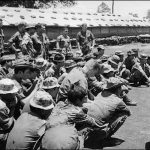 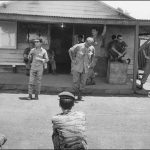 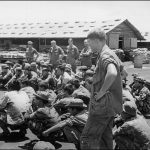 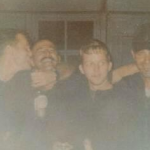 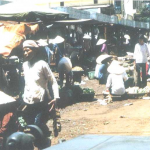 Downtown Bam Me Thou 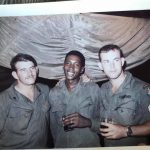