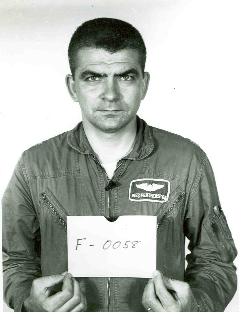 Source: Compiled by Homecoming II Project 01 April 1990 with the assistance of one or more of the following: raw data from U.S. Government agency sources, correspondence with POW/MIA families, published sources, interviews. Updated by the P.O.W. NETWORK 2020.

SYNOPSIS: The Plain of Jars region of Laos was long under the control of the communist Pathet Lao and a continual effort had been made by the secret CIA-directed force of some 30,000 indigenous tribesmen to strengthen anti-communist strongholds there. The U.S. committed hundreds of millions of dollars to the war effort in Laos, but details of this secret operation were not released until August 1971.

Doug Ferguson and Fielding Featherston were aboard one of five F4D aircraft on a mission into the Plaine des Jarres region of Laos on December 30, 1969.  Their ship was hit by enemy fire and exploded in a fireball. There were no parachutes seen, nor were emergency radio “beeper” signals heard that day by other aircraft.

On the following day, the crash site was photographed and two empty parachutes were visible hanging in nearby trees. The area was too heavily defended for a ground search to be possible.