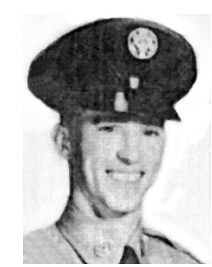 SYNOPSIS: On November 8, 1967, two Air Force “Jolly Greens” (#26 and #29) from the 37th Aerospace Rescue and Recovery Squadron were scrambled from Da Nang Air Base at 1505 hours for an emergency extraction of five surviving
members of a Special Forces reconnaissance team which had suffered heavy casualties while operating deep in a denied area in Laos. The recovery effort was to be recorded by the Squadron as one of the largest and most hazardous on record.

By the afternoon of November 9, a recovery team was inserted into the area and reached the crash site of the burned HH3. Because of fading light, it was impossible to inspect the wreckage at that time.

On 10 November, the wreckage was searched and 3 charred remains were found.  Two of the remains had identification tags which identified them as members of the crew. The third remains had no tags, but were identified as SP4 Kusick, radio operator of the reconnaissance team, as the long antenna from his PRC-25 radio were found on his body. CAPT Young had survived and was rescued 17 hours after the crash of the aircraft.

About 34 meters downhill from the wreckage, another set of remains were found which were readily identified as MSGT Baxter from the facial features. No trace was found of the third crew member. The remains of the two crewmen and Kusick were removed from the aircraft and placed with MSGT Baxter’s remains so they could be hoisted as one lift into a hovering helicopter. The identificaton tags of the crewmembers were placed with the remains. Weather conditions and enemy action would not permit helicopters to make the extraction either that day or the day following.

The remains of the crew and passengers aboard Jolly Green 26 were never recovered. Although the location of the crash is known, the bodies of the crew and recon team who died still lie on foreign soil. The five are among nearly 600 Americans lost in Laos. Not one prisoner was released from Laos, and few remains have been recovered.