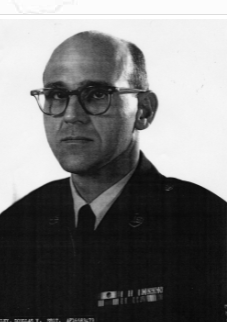 The crew on this particular mission included the pilot (name unknown); 1Lt. Joseph P. Fanning, co-pilot; 1Lt. John S. Albright, navigator; 1Lt. Morgan J. Donahue, navigator; SSgt. Samuel F. Walker, SSgt. Douglas V. Dailey, TSgt. Fred L. Clarke, crewmembers. At 0330 hours, as the aircraft was flying about 30 miles southwest of the Ban Karai Pass in Laos, the crew of the C123 were jolted by a blow on the top of their plane in the after section. An overhead B57 that had been called in for an air strike had collided with the
control plane. The C123 lost power and went out of control. The pilot, stunned by a blow to the head, lost consciousness.

plane did not fall straight to the ground, but drifted lazily to the ground in a flat spin which lasted several minutes. When the pilot regained
consciousness, he noted that the co-pilot (Fanning) and navigator (Donahue) were gone. Donahue’s station was in the underbelly of the plane where, lying on his stomach, he directed an infared detection device through an open hatch. The pilot parachuted out, landed in a treetop where he remained until rescued at dawn. On the way down, he saw another chute below him, but, because of the dark, was unable to determine who the crew member was.

Intelligence reports after the incident indicate that Donahue, at least, safely reached the ground near Tchepone, but suffered a broken leg. A
refugee who escaped captivity in Laos in 1974 reported having observed an American prisoner brought to the caves near Tchepone, where he was held, in the period between 1968 and 1970. This American was later moved to another location unknown to the refugee.

Several reports referring to “Moe-gan” and others describing Donahue as the American called the “animal doctor” were received over the years since war’s end. In June and August, 1987, the Donahue family was given intelligence reports tracking Morgan’s movements from a POW camp in Kham Kuet, Khammouane Province, Laos in the spring of 1987 to another camp in the Boualapha District of the same province in August 1987. These reports were mere WEEKS old, yet the U.S. marked them “routine”. One of them gave Morgan’s aircraft
type and serial number, which turned out to be, instead of the serial number of the aircraft, Morgan’s father’s ZIP CODE. Morgan’s family believes this is clearly a signal to them from Morgan.