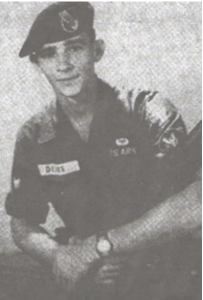 Source: Compiled by Homecoming II Project 15 October 1990 from one or more of the following: raw data from U.S. Government agency sources, correspondence with POW/MIA families, published sources, interviews.  Updated by the P.O.W. NETWORK 2020.

SYNOPSIS: Donald T. Deere was a Special Forces Advisor with Detachment A-331 in Vietnam. On May 17, 1966, he was part of a Mobile Strike Force that made contact with an enemy force estimated to be battalion sized. During that contact, Deere was wounded, and during an attempt to rescue him, it appeared that he was hit a second time.

Because of intense enemy activity, the remainder of the Strike Force was forced to pull back without further rescue attempts. Air strikes were directed into the area, and the team withdrew, leaving Deere behind.

It is assumed that Donald Deere was killed, either by the enemy attack or the subsequent necessary air strikes. He is listed among the missing because no remains were ever recovered.

Other cases among the missing are not quite as clear. Many were known to be alive at the time they disappeared. Some were in radio contact with would-be rescuers and informed them of their imminent capture. Some were photographed as prisoners of war. Others simply disappeared without a trace.