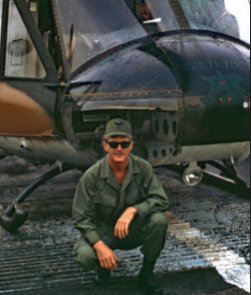 Don Haase joined the Army in July 1966. He completed basic at North Ft. Lewis, then the Single-Rotor Turbine Utility Helicopter Maintenance Course (67N20) at Ft. Eustis. In January 1967, Don went to Ft. Carson to form the 195th Aviation Company from scratch. In April 1967 Don was promoted PFC and trained in Air Mobile tactics until the unit received orders for Vietnam in August. The renamed 195th Assault Helicopter Company commenced combat operations in December 1967 in Opcon support of MACV SOG at CCS. Up to March 1968 Don was crew leader of the night unscheduled maintenance team, then assigned Crew Chief in the 2nd. Airlift Platoon (GhostRiders). In May 1968 their aircraft were painted in Airforce camo paint scheme and all identifying marks were removed. Between June and November 1968, now a Spec.5, Don received 12 Air Medals for 300 Combat missions and the Presidential Unit Citation. Don also received the Vietnam campaign ribbon, and participated in the defense of Plantation Army airfield during the Tet 1968 offensive and the May Counter-offensive After DEROSing from Vietnam in November he reported to Ft. Hood, where he served in a fuel tanker transportation company. In June 1969 he was honorably discharged from the U.S. Army.