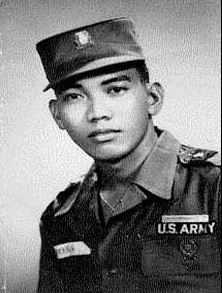 SYNOPSIS: Domingo Borja was a member of a Special Forces reconnaissance team attached to Headquarters & Headquarters Company, Command & Control Detachment, 5th Special Forces Group. On February 21, 1967, the team was
operating in Laos near the Laos/South Vietnam border, in extreme northern Saravane Province very near the province boundary of Savannakhet Province. The location is so near Vietnam that some lists locate Borja’s area of operations in South Vietnam.

While trying to assist a wounded teammember, Borja was confronted by an enemy soldier. Each fired at the other simultaneously, and both were killed instantly. Both bodies were checked by 2 teammembers who detected no signs
of life whatever.

Because of the enemy presence in the area, the remainder of the team evaded and left the body of Borja behind for later recovery. Subsequent efforts to locate and recover the remains for the next 5 days were unsuccessful.