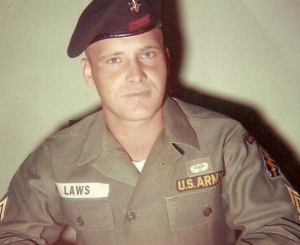 On July 29, 1966, a reconnaissance patrol comprising three American and seven South Vietnamese troops was on a combat mission in Laos. During the afternoon, the patrol was at a halt by a small stream when they were ambushed by an enemy force of unknown size near (GC) XD 709 269. The team was dispersed along a trail through high elephant grass that limited visibility, and several members of the team lost sight of one another. The team leader eventually rallied the team and moved north, but one American and three South Vietnamese were killed during the action, and one American was discovered to be missing following the incident. A few days later, a recovery team located the body of the fallen American, but the one who had gone missing was not seen again.

Staff Sergeant Delmer Lee Laws entered the U.S. Army from Missouri and served in Headquarters & Headquarters Company, 5th Special Forces Group. He was the member of the patrol who went missing during the ambush, and further attempts to locate him or his remains were unsuccessful. Subsequent to the incident, and while carried in the status of missing in action (MIA), the U.S. Army promoted Staff Sergeant Laws to the rank of Sergeant First Class (SFC). Today, Sergeant First Class Laws is memorialized on the Courts of the Missing at the National Memorial Cemetery of the Pacific.