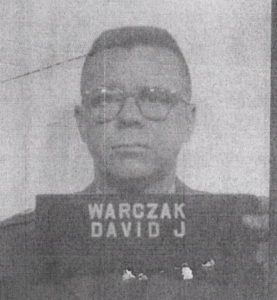 The President of the United States of America, authorized by Act of Congress, July 8, 1918 (amended by act of July 25, 1963), takes pleasure in presenting the Silver Star to Sergeant First Class David J. Warczak, United States Army, for exceptionally valorous actions on 3 October 1966 as team leader of a four-man Special Forces reconnaissance patrol that had penetrated deep into hostile territory. Having made contact with two squads of Viet Cong, Sergeant Warczak and his patrol were engaged in an intense firefight when his assistant team leader was seriously wounded. Without thought for his personal safety, he ran through devastating hostile fire to the wounded man, dragged him into a position of relative safety, and administered first aid. When the extraction aircraft arrived overhead, he realized that it would be unable to help the team at its present location due to the impenetrable vegetation. Sergeant Warczak lifted the wounded man and carried him through the thick brush toward a clear landing zone. Constantly subjected to intense hostile fire, he moved over one hundred meters to the landing zone, waited until his teammates had been extracted then boarded the helicopter. His courage against a numerically superior enemy force turned the tide in what could have been a fatal situation.

With Great Respect – Rest In Peace: SFC David James Warczak.  His home of record was Alexandria, VA. He had over 18 years of service in the Army and was 36 years of age at the time of his death on March 4, 1969. SFC Warczak is buried in Arlington National Cemetary.  His name location on THE WALL is Panel 30W, Line 40.