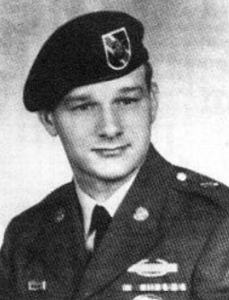 Awarded the Silver Star while MIA

Source: Compiled by from one or more of the following: raw data from U.S. Government agency sources, correspondence with POW/MIA families, published sources, interviews. Updated by the P.O.W. NETWORK. 2020

SYNOPSIS: The Lang Vei Special Forces camp in the northwestern corner of South Vietnam along Route 9, a mile and a half from the Laotian border.had been established in late December 1966 as a result of the Special Forces Detachment A101 having been moved out of its former Khe Sanh location. It seemed ill fated from the beginning.

In March 1967, one of the worst tragedies to befall the Special Forces CIDG program during the war occurred. U.S. Air Force released napalm ordnance on the nearby village which spewed exploding fire over the camp, landing zone, minefield and village. 135 CIDG and native civilians were killed, and 213 were horribly wounded, burned or disfigured.

Only two months later, on May 4, a Viet Cong night attack on the camp wiped out the Special Forces command group, all in one bunker, and killed the detachment commander and his executive officer, as well as seriously wounding the team sergeant. This attack was a prelude to the larger siege of Khe Sanh, and was a grim reminder of the dangerous neighborhood Special Forces had moved into.

By January 1968, several North Vietnamese Army divisions had encircled the Marine combat base at Khe Sanh, placing the more westerly Lang Vei Special Forces frontier surveillance camp in imminent danger. The camp was occupied by Detachment A101 commanded by Capt. Frank C. Willoughby. Willoughby was rebuilding and reinforcing the camp at the time, while soldiers and dependants from the Kha tribal 33rd Laotian Volunteer Battalion streamed into the camp after being overrun by NVA tanks across the border.

On the evening of January 24, the camp was pounded by mortars in conjunction with a heavy shelling of the Marine Khe Sanh base, which prevented any effective artillery support for Lang Vei. 1Lt. Paul R. Longgrear had only recently arrived with his Hre tribal 12th Mobile Strike Force Company to help shore up defensive firepower.

The influx of the Laotians caused some problems. For example, the Lao battalion commander refused to take orders from the American captain, forcing the Company C commander, LtCol. Daniel F. Schungel, to come to Lang Vei on his first Special Forces assignment on February 6 to provide an officer of equal rank.

Shortly after midnight on February 7, 1968, a combined NVA infantry-tank assault drove into Lang Vei. Two PT-76 tanks threatened the outer perimeter of the camp as infantry rushed behind them. SFC James W. Holt destroyed both tanks with shots from his 106mm recoilless rifle. More tanks came around the burning hulks of the first two tanks and began to roll over the 104th CIDG Company’s defensive positions. SSgt. Peter Tiroch, the assistant intelligence sergeant, ran over to Holt’s position and helped load the weapon. Holt quickly lined up a
third tank in his sights and destroyed it with a direct hit. After a second shot at the tank, Holt and Tiroch left the weapons pit just before it was demolished by return cannon fire. Tiroch watched Holt run over to the ammunition bunker to look for some hand-held Light Anti-tank Weapons (LAWs). It was the last time Holt was ever seen.

LtCol. Schungel, 1Lt. Longgrear, SSgt. Arthur Brooks, Sgt. Nikolas Fragos, SP4 William G. McMurry, Jr., and LLDB Lt. Quy desperately tried to stop the tanks with LAWs and grenades. They even climbed on the plated engine decks, trying to pry open hatches to blast out the crews. NVA infantrymen followed the vehicles closely, dusting their sides with automatic rifle fire. One tank was stopped by five direct hits, and the crew killed as they tried to abandon the vehicle. 1Lt. Miles R. Wilkins, the detachment executive officer, left the mortar pit with several LAWs and fought a running engagement with one tank beside the team house without much success.

Along the outer perimeters, the mobile strike force outpost was receiving fire. Both Kenneth Hanna, a heavy weapons specialist, and Charles W. Lindewald, 12th Mobile Strike Force platoon leader, were wounded. Hanna, wounded in the scalp, left shoulder and arm tried to administer first aid to Lindewald. The two were last seen just before their position was overrun. Harvey Brande spoke with them by radio and Hanna indicated that Lindewald was then dead, and that he himself was badly wounded. Daniel R. Phillips, a demolitions specialist, was wounded in the face and was last seen trying to evade North Vietnamese armor by going through the northern perimeter wire.
.
NVA sappers armed with satchel charges, tear gas grenades and flamethrowers fought through the 101st, 102nd and 103rd CIDG perimeter trenches and captured both ends of the compound by 2:30 a.m. Spearheaded by tanks, they stormed the inner compound. LtCol. Schungel and his tank-killer personnel moved back to the command bunker for more LAWs. They were pinned behind a row of dirt and rock
filled drums by a tank that had just destroyed one of the mortar pits. A LAW was fired against the tank with no effect. The cannon swung around and blasted the barrels in front of the bunker entrance. The explosion temporarily blinded McMurry and mangled his hands, pitched a heavy drum on top of Lt. Wilkins and knocked Schungel flat. Lt. Quy managed to escape to another section of the camp, but the approach of yet another tank prevented Schungel and Wilkins from following. At some point during this period, McMurry, a radioman, disappeared.

The tank, which was shooting at the camp observation post, was destroyed with a LAW. Schungel helped Wilkins over to the team house, where he left both doors ajar and watched for approaching NVA soldiers. Wilkins was incapacitated and weaponless, and Schungel had only two grenades and two magazines of ammunition left. He used one magazine to kill a closely huddled five-man sapper squad coming toward the building. He fed his last magazine into his rifle as the team house was rocked with explosions and bullets. The two limped over to the
dispensary, which was occupied by NVA soldiers, and hid underneath it, behind a wall of sandbags.

At some point, Brande, Thompson and at least one Vietnamese interpreter were captured by the North Vietnamese. Thompson was uninjured, but Brande had taken shrapnel in his leg. Brande and Thompson were held separately for a week, then rejoined in Laos. Joined with them was McMurry, who had also been captured from the camp. The three were moved up the Ho Chi Minh trail to North Vietnam
and held until 1973. The U.S. did not immediately realize they had been captured, and carried them in Missing in Action status thoughout the rest of the war, although Brande’s photo was positively identified by a defector in April 1969 as being a Prisoner of War. A Vietnamese interpreter captured from the camp told Brande later that he had seen both Lindewald and Hanna, and that they both were dead.

Several personnel, including Capt. Willoughby, SP4 James L. Moreland, the medic for the mobile strike force, and Lt. Quan, the LLDB camp commander, were trapped in the underground level of the command bunker. Lt. Longgrear had also retreated to the command bunker. Satchel charges, thermite grenades and gas grenades were shoved down the bunker air vents, and breathing was very difficult. Some soldiers had gas masks, but others had only handkerchiefs or gauze from their first aid packets.

The NVA announced they were going to blow up the bunker, and the LLDB personnel walked up the stairs to surrender, and were summarily executed. At dawn, two large charges were put down the vent shaft and detonated, partially demolishing the north wall and creating a large hole through which grenades were pitched. The bunker defenders used upturned furniture and debris to shield themselves. Willoughby was badly wounded by grenade fragments and passed out at 8:30 a.m. Moreland had been wounded and became delirious after receiving a head injury in the final bunker explosion. Incredibly, the battle was still going on in other parts of the camp.

Aircraft had been strafing the ravines and roads since 1:00 a.m. Throughout the battle, the Laotians refused to participate, saying they would attack at first light. Sfc. Eugene Ashley, Jr., the intelligence sergeant, led two assistant medical specialists, Sgt. Richard H. Allen and SP4 Joel Johnson as they mustered 60 of the Laotian soldiers and counterattacked into Lang Vei. The Laotians bolted when a NVA machine gun crew opened fire on them, forcing the three Americans to withdraw.

Team Sfc. William T. Craig and SSgt. Tiroch had chased tanks throughout the night with everything from M-79 grenade launchers to a .50 caliber machine gun.  After it had become apparent that the camp had been overrun, they escaped outside the wire and took temporary refuge in a creek bed. After daylight, they saw Ashley’s counterattack force and joined him. The Special Forces sergeants persuaded more defenders fleeing down Route 9 to assist them and tried second, third and fourth assaults. Between each assault, Ashley directed airstrikes on the NVA defensive line, while the other Special Forces soldiers gathered tribal warriors for yet another attempt. On the fifth counterattack, Ashley was mortally wounded only thirty yards from the command bunker.

Capt. Willoughby had regained consciousness in the bunker about 10:00 a.m. and established radio contact with the counterattacking Americans. The continual American airstrikes had forced the North Vietnamese to begin withdrawing from the camp. Col. Schungel and Lt. Wilkins emerged from under the dispensary after it was vacated by the North Vietnamese and hobbled out of the camp.

The personnel in the bunker also left in response to orders to immediately evacuate the camp. They carried Sgt. John D. Early, who had been badly wounded by shrapnel while manning the tower, but were forced to leave SP4 Moreland inside the bunker. 1Lt. Thomas D. Todd, an engineer officer in charge of upgrading Lang Vei’s airstrip, held out in the medical bunker throughout the battle. That afternoon, he was the last American to pass through the ruined command bunker. He saw Moreland, who appeared to be dead, covered with debris.

Maj. George Quamo gathered a few dozen Special Forces commando volunteers from the MACV-SOG base at Khe Sanh (FOB #3) and led a heroic reinforcing mission into Lang Vei. His arrival enabled the Lang Vei defenders to evacuate the area, many by Marine helicopters in the late afternoon.