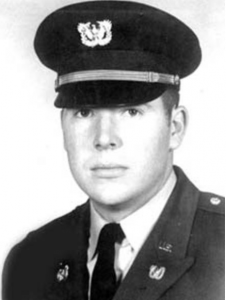 The aircraft departed Camp Evans in South Vietnam as the assault aircraft of a helicopter team attempting to extract a reconnaissance team that was under heavy fire by an unknown size enemy force about 10 miles northeast of Khe Sanh in Quang Tri Province, South Vietnam.

Upon approach to the target, WO1 Pearce’s aircraft began taking heavy enemy fire. The aircraft began to bank to the right and was hit, causing the helicopter to start to turn over. An RPG hit and severed the tail boom, and the violence of the explosion threw Alcorn from the aircraft just before it crashed. After impact, the aircraft slid to the bottom of a slope.

On May 18, a recovery team was inserted in the area to recover the remains of the original reconnaissance team and to search the aircraft wreckage for survivors. At this time, both Parker and Alcorn were discovered alive, and remains which were assumed to be those of Pearce were found. Without tools, the recovery of the remains was impossible, as they were wedged beneath the aircraft debris. The left pilot seat was completely intact, and no sign of blood on it or in the immediate area was found. All harnesses in the aircraft had been unfastened.

Alcorn reported that he saw a man in a white t-shirt running across the ridge line. A search aircraft in the area reported hearing a loud beeper distress signal. It was concluded that the man had been W1 Soyland, who would have been the occupant of the left pilot seat. From the way the aircraft impacted, on its right side, Soyland, seated on the left side of the aircraft, would have had a high probability of surviving the crash.