The ramp of the C-130 began to drop.  The sound of wind and engines howling in the black Laotian night greeted the six men of S.O.G.’s Recon Team Florida as they moved to the edge.  All of their recent training, over a month’s worth, brought them to this moment.  Team leader, or One- Zero Staff Sergeant Cliff Newman, Sergeant First Class Sammy Hernandez, and Sergeant First Class Melvin Hill made up three of the six. The others were two Montagnards and a South Vietnamese Army officer.  As they stood there, all saw the vast expanse of sky stained with dark gray clouds and knew they’d be jumping into rain.  It didn’t matter.  The time was now.

“Go!” came the command.  With that, they stepped off and plunged into the darkness.  The Americans more than the others realized they were making history.  The first H.A.L.O. jump ever made in combat was under way. 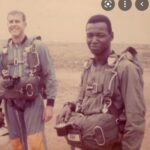