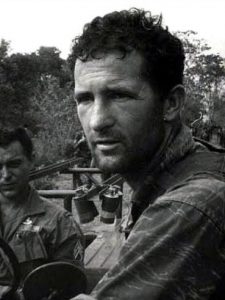 SYNOPSIS: SFC Charles F. Bookout was a squad leader assigned to MACV-SOG (Military Assistance Command, Vietnam Studies and Observation Group). MACV-SOG was a joint service high command unconventional warfare task force
engaged in highly classified operations throughout Southeast Asia. The 5th Special Forces channeled personnel into MACV-SOG (although it was not a Special Forces group) through Special Operations Augmentation (SOA), which
provided their “cover” while under secret orders to MACV-SOG. The teams performed deep penetration missions of strategic reconnaissance and interdiction which were called, depending on the time frame, “Shining Brass” or “Prairie Fire” missions.

On the Fourth of July in 1970, SFC Bookout was conducting a reconnaissance mission when his unit was ambushed in Laos. The team’s position was near the border of Laos and South Vietnam, south of the South Vietnam city of A Shau,
in Saravane Province, Laos.

On the first burst of fire, SFC Bookout was wounded. He was examined by one of the squad members, and a single bullet hole was found in the left side of his back. About 10 minutes later he stopped breathing, and no pulse could be found. Due to the tactical situation and the intense enemy fire, the team was instructed to move to a clearing for extraction.

SFC Bookout was left behind, because it would have slowed the progress and endangered the lives of the rest of the team to try and carry him to safety. It was believed that he was dead. The rest of the team was extracted safely at about 1900 hours that day. No search teams were inserted to recover Bookout because of impending darkness and the enemy situation.

For every insertion like SFC Charles Bookout’s that was detected and stopped, dozens of other commando teams safely slipped past NVA lines to strike a wide range of targets and collect vital information. The number of MACV-SOG missions conducted with Special Forces reconnaissance teams into Laos and Cambodia was 452 in 1969. It was the most sustained American campaign of raiding, sabotage and intelligence gathering waged on foreign soil in U.S. military history. MACV-SOG’s teams earned a global reputation as one of the most combat effective deep-penetration forces ever raised.

The missions Bookout and others were assigned were exceedingly dangerous and of strategic importance. The men who were put into such situations knew the chances of their recovery if captured was slim to none. They quite naturally
assumed that their freedom would come by the end of the war.