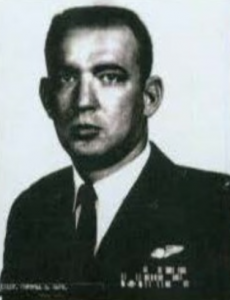 On April 9, 1971, an A-1H Skyraider (tail number 52-137628) took off from Nakhon Phanom Royal Thai Air Force Base, Thailand, as one of two aircraft on a search and rescue mission over Laos. A Forward Air Controller (FAC) aircraft joined the flight over the rendezvous point and the two Skyraiders then attacked suspected enemy ground positions in the area. After several passes, enemy fire from the ground positions ceased, but the pilot of the other Skyraider lost visual contact with this aircraft and believed it had crashed. A search and rescue helicopter was brought to the area and located the aircraft wreckage but failed to locate recover the pilot.

Captain Carroll Baxter Lilly entered the U.S. Air Force from West Virginia and was a member of the 1st Special Operations Squadron, 56th Special Operations Wing. He was the pilot of this Skyraider when it crashed and he remains unaccounted for. Subsequent to the incident, and while carried in the status of missing in action (MIA), the U.S. Air Force promoted Captain Lilly to the rank of Lieutenant Colonel (Lt Col). Today, Lieutenant Colonel Lilly is memorialized on the Courts of the Missing at the National Memorial Cemetery of the Pacific.