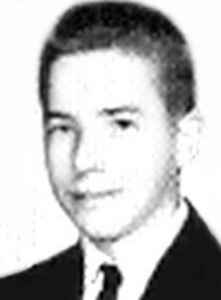 On May 13, 1969, an O-1G Bird Dog (tail number 51-16959, call sign “Aerial Observer 02”) carrying two crew members took off on a radio relay mission for a Special Forces reconnaissance team in the area of the Vietnam-Laos border. During the mission, the reconnaissance team made radio contact with this Bird Dog and at that time could hear anti-aircraft artillery fire to the southwest of their position. The reconnaissance team then lost radio contact with the Bird Dog. The Bird Dog failed to return to base. Following the incident, cloud cover and enemy presence prevented an aerial search for the plane’s suspected crash site.

First Lieutenant Bruce Carlton Bessor entered the U.S. Army from Virginia and was a member of 219th Aviation Company, 17th Aviation Group, 1st Aviation Brigade. He was the pilot of this Bird Dog when it went missing, and he was lost with the aircraft. His remains were not recovered. Subsequent to the incident, and while carried in the status of missing in action (MIA), the U.S. Army promoted First Lieutenant Bessor to the rank of Captain (CPT)