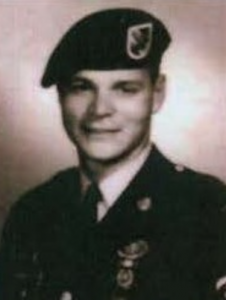 MACV-SOG (Military Assistance Command, Vietnam Studies and Observation Group), was a joint service high command unconventional warfare task force engaged in highly classified operations throughout Southeast Asia. The 5th Special Forces channeled personnel into MACV-SOG (although it was not a Special Forces group) through Special Operations Augmentation (SOA), which provided their “cover” while under secret orders to MACV-SOG. The teams performed deep penetration missions of strategic reconnaissance and interdiction which were called, depending on the time frame, “Shining Brass” or “Prairie Fire” missions.

On March 18, SP4 Murphy was serving as the assistant team leader of a 10 man team which had been inserted by helicopter on a reconnaissance mission in Kampong Cham Province, located in south central Cambodia. Soon after leaving the helicopter and moving on to the objective, the team was ambushed by an unknown size enemy force.

During the ensuing fire fight, Murphy was hit several times from small arms fire and died. Three other team members were killed before the helicopter could extract the survivors. Because of enemy fire, all remains were left behind. Subsequent air search for the remains failed to locate them.

There are several discrepancies in the case of Barry D. Murphy. First of all, even though the U.S. Army indicates that four team members’ remains were lost in the fire fight and not recovered, only Murphy is missing from the action. Further, Defense Department lists indicate that the coordinates of loss for Murphy are located at Ban Me Thuot, South Vietnam, some 110 miles from the closest province border point of Kampong Cham Province, Cambodia, and about 35 miles from the closest border point of Cambodia itself.