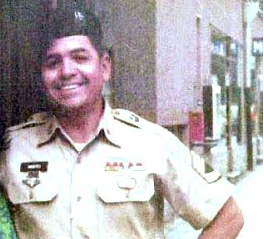 SYNOPSIS: SFC Anastacio Montez commanded a company of civilian irregulars in a strike force (MSFC) and was assigned to Detachment B-20, 5th Special Forces Group. The 2nd Mobile Strike Force Command, assigned to Detachment B-20 at Pleiku had during 1968 contained 3 battalions and also satellited separate battalions under Detachment B-22 at Qui Nhon, B-23 at Ban Me Thuot, and B-24 at Kontum. On April 1, 1969, the mobile strike force companies in II CTZ (Montez’ area of operations) were reconsolidated at Pleiku and trimmed down to a total of six companies.

On May 24, 1969, Montez’s company encountered a numerically superior group in a fire fight in Kontum Province, South Vietnam. The American members of the team tried to defend a small hill. During this time, Montez was badly wounded and, according to survivors, later died.

As the enemy pressed the attack, surviving members of the team had to abandon the position, leaving Montez behind. Because of heavy enemy concentration in the area, it was never possible to reenter the area of loss to recover Montez.