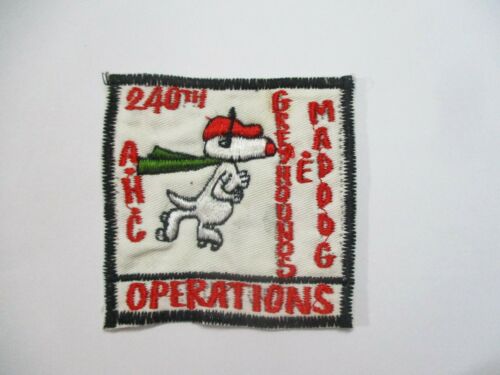 In 1968, the 240th were located at Bearcat, Binh Hoa Province, Vietnam. Bearcat was located near Saigon on Highway One.  Known as the “Greyhounds, Mad Dogs, and Kennel Keepers,” the 240th operated UH1C gunships, armed with mini-guns and rockets in the gun platoon, call sign “Mad Dog” and a transport or slick platoon flying UH1H slicks, call sign “Greyhound.” The maintenance platoon was known as the “Kennel Keepers.”

“The 240th AHC operated about 30 UH1 “Huey” helicopters from their main operating base at Bearcat, Vietnam.  During the early spring of 1968, about eight of their aircraft and crews were attached to Project Sigma’s Detachment B-56 of the 5th AFGA to support that unit’s top-secret covert operations into Cambodia.  Several months later, it was this detachment of the 240th that fought the battle that Roy Benavidez came to call “Six Hours In Hell.” Over 36 members of the 240th AHC participated in the Benavidez Medal of Honor Incident.  They started the emergency extraction with four gunships and four slicks, but were reduced to three operational aircraft by the time Roy Benavidez had joined the mission.  Three members of the 240th AHC gave their lives for their country and their comrades on 05/02/68, during the action in Cambodia for which Roy Benavidez was awarded the Medal of Honor.  Thirty-three others of the 240th gave and survived heroic performances that day.”  We do not know of any subsequent missions for B-50 or B-56, C5 or CCS that were flown by the 240th.