VNAF Helicopter pilots.  We flew in unmarked CH-34 helicopters code named “Kingbees”.  The Kingbee pilots were legendary in C&C — especially two we called “Cowboy” and “Mustacio”. They flew in near “zero ceiling” weather and without gunship support to extract teams. They hovered against steep hillsides and even used their rotor blades to “cut” through vegetation in order to get to the teams. 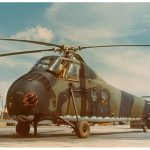 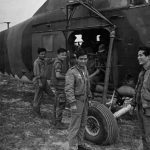 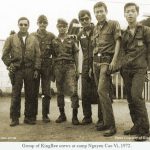 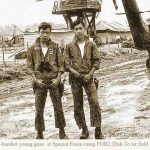 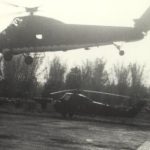 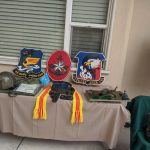 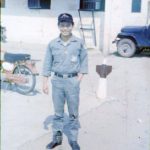 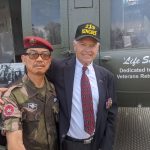 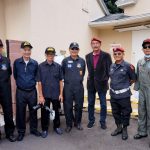 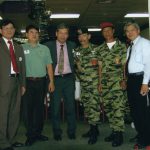 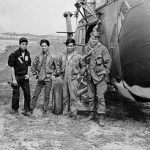 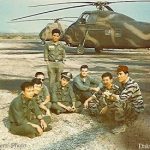 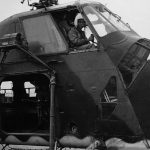 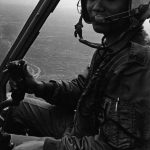 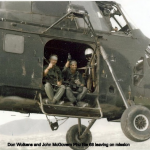 MCGovern and Wolkens at Phu Bia 1968 leaving for a mission. 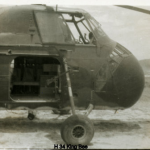 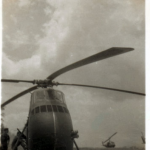 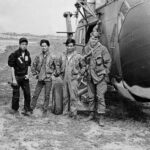 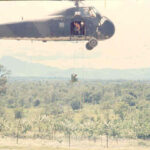 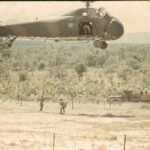 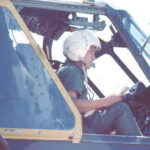 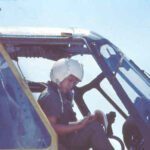 03 Jul 66; Edwin J McNamara, Cpt 0-3, USASF RT Nevada, Tm Leader (One-Zero) and Donald J Fawcett, SSG E-6, USASF Team Radio Operator (One-Two) were KIA-RR, Ralph Joseph Reno, MSG E-8, USASF Team Assistant Team Leader (One-One), Fayetteville, NC, MIA; and Nine Vietnamese Soldiers (names and Ranks unknown) were KIA
(These 12 men were assigned to FOB #2, OPS 35, KONTUM, SOG) and a CH-34 Vietnamese Helicopter crew consisting the VN Pilot, (Cpt [Dau Uy Nguyen Van Hoang aka “Mustachio, “Co-pilot and Door Gunner-names and ranks unknown were also KIA.
The aircraft was returning from Kham Duc [after a mission] to Kontum, FOB 2 (flying at 5,000 feet) when it hit a severe air turbulence resulting in the aircraft “falling apart” loss of the rear tail rotor (the tail , designed to pivot for storage on aircraft carriers, had come loose, swung around and chewed the helicopter to pieces in mid air) causing the aircraft to rotate rapidly, falling some (1,500 ?) feet in a tight spiral, throwing individuals and debris over a large area.
Impacting the ground nose first. Remains of 2 Americans and 5 Vietnamese were recovered. MSG Reno and 4 Vietnamese soldiers remains were not found after a 5 day aerial and ground search. [Filed by William “Billy” Waugh: on or about 02 Jul 66 SSG Donald Fawcett was en route to Kam Duc, SVN, with other Americans, aboard an H-34 rescue helicopter. Due to poor visibility and suspected ground fire, one of the H-34 helicopter clipped the blades of the chopper in which Fawcett, et.al., were pax. All aboard were killed by the crash, and I am not certain if their bodies were ever rescued or not]. (See pg 105-106, SOG A Photo History of the Secret Wars by John Plaster

15 Jun 67- Ben D. Snowden, SFC E-7 (MSG E-8), USASF, B-56-KIA-RR and One unknown A-1 Skyraider pilot-MIA-Presumptive finding of Death.Snowden, a passenger in a CH-34 Kingbee attempting to rescue recon team
that technically belonged to project Omega consisting of two Americans and four Nungs who were surrounded by an enemy force. The enemy had the team surrounded, but was not interested in destroying them. The team was bait to draw in a helicopter.
Due to the steep slopes, the helicopter required a passenger to help load the team. Just as the team leader lifted one of his Nungs up to the helicopter, a massive volume of fire erupted from a fixed, hidden machine gun hitting the aircraft.The helicopter groggily rocked and lifted away somehow making it back to SOG’s Dak To launch site, riddled with sixty-eight bullet holes, its engine out, it slammed into a ditch. Snowden had been hit by nine times and had died.The A-1 was a propeller driven aircraft, but saved the day for the team, it received the exact heading to the hidden machine gun from the team, rolled in, banked above the team and executed a bombing run, dropping a shiny canister that spun end over end just above the team, spewing jellied gasoline into the small cave mouth which provided cover for the machine gun, the napalm flashed eliminating the machine gun allowing the team to be rescued.When the A-1 was pulling away from the bomb run, it continued taking fire until it belched smoke, nose up, with the pilot ejecting and the canopy fall away with the parachute drifting into the NVA positions. The team was rescued by the same pilot who piloted the helicopter that was shot up, who insisted on flying the rescue mission because he knew the terrain.

10 Apr 68- Samuel Jospeh Padgett, SFC E-7 of Tulsa, Oklahoma, George N Deverall, CPT 0-3; Aubey A. Bryan, SFC E-7; Charles F. Wilcox, Jr. SFC E-7, USASF, FOB-4, Da Nang, Ops 35; Crecencio Cardosa, SFC E-7; and a Vietnamese Pilot, Co-Pilot and door gunner, names and ranks unknown CH-34 (Kingbee) Aircrew, Vietnamese Air Force, 2l9th Vietnamese Helicopter Squadron, Da Nang Air Base, Ops 32. All KIA-RR
and identified except for SFC Padgett who is listed as MIA-Presumptive finding of death. (Aircraft was caring five newly assigned team leaders from FOB-4 to MAC SOG Recon School at Kham Duc when the aircraft was disabled by enemy fire and crashed and burned). “Charles Wilcox was my first team leader and I knew all who were killed with him. My good friend Pat Watkins went in to find the bodies and when they were brought out, it was difficult to tell them from the animals that were being transported along with them on the Chopper.

We didn’t know if it was shot down or just flew into the mountain. I ran 2 missions with Charlie, launched out of FOB2, into Sierra 3 and Hotel 9. Pat Watkins was a straphanger on the H-9 mission and it was quite a day. I don’t know why I remember the designations of those missions, but I do.” BY Tim Schaaf

14 Apr 68- George Quamo, Maj 0-4, US Army Infantry, Project Elephant Commander, FOB-3, OPS 35 and a Vietnamese U-17 Pilot and Co-Pilot, Vietnamese Air Force, Da Nang Air Base, Ops 32. KIA-RRWhile transporting SOG documents, he was picked up by two Vietnamese pilots at the Khe Sanh Airstrip and has not been heard from since. He graduated from High School in Averill Park, NY, 1958, enlisted in the Army and attended OCS, Airborne, Pathfinder, and Ranger training. MIA