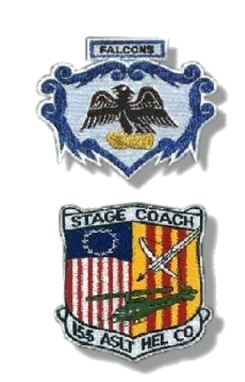 The 155th arrived in Vietnam in 1965 as A Company, 1st Aviation Battalion, 1st Infantry Division. They were located on the west side of Ban Me Thuot at Camp Coryell, named in honor of WO Coryell who was shot down and killed in October 1966. The 155th quickly distinguished themselves as they supported a changing variety of US and ARVN units in the II Corps area.  In a one-month period, they were deployed in all four Corps areas.  In November ‘65 the unit was renamed the 155th Aviation Company (Airmobile Light), of the 52nd Avn Bn.  On Thanksgiving Day ‘66, they supported Project Omega (B-50) for the first time.

The 155th transferred to the 10th CAB in June ‘68. They provided exceptional support during the Battle of Duc Lap in Aug & Sept ‘68. In July and Sept ‘69 they were again tasked to support B-50 for 30-day periods. In Feb ‘70, the 155th resumed its support of B-50 operations. “This mission consisted of providing assets in support or reconnaissance patrols with a normal commitment of four to six UH-1H aircraft. The Air Force provided the FAC and the gunship assets. As one pilot said, “B-50 is a mission of hours of boredom broken by seconds of extreme terror.”

The unit also continued to provide support to the local area of operation as well as B-50 and the 4th Inf. Div in men Province during April ‘70.   20 April ‘70 was a particularly bad day; one of their Slicks crashed while extracting one of our teams, but the crew was recovered. Later that day, a second slick was shot down extracting a recon team, killing both pilots.

During June and Sept. ’70, the 155th was again given the commitment to support B-50 operations. Four slicks and four guns were provided each day for the missions. Though the 155th only supported CCS Recon mission on an interim basis, the supported our base camp on many occasions whenever the city came under the numerous Tet and other attacks.

On Dec. 14, ’70 at 2400 hours, the 155th Assault Helicopter Company ceased operations and began the massive task of deactivation. The unit’s history referred consistently to CCS as “B-50.” The 155th AHC lost seven men supporting CCS and about 60 men altogether. 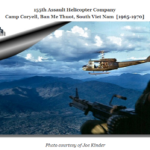